Oh yes, I’m talking once again about Sharapova and Azarenka, those two shrieking and screaming ex-Soviet disgraces to both professional tennis and sport in general.

Well strike me pink, you’d think they wouldn’t have the nerve to show their faces in Australia again after the severe tongue lashing I gave them last year.

Obviously that wasn’t enough, so maybe I’ll have to resurrect my very own nineteen-sixties four step protest procedure which saw me single-handedly stop the Vietnam war, abolish capital punishment, and ensure that more bras were burned than were strictly necessary to promote the liberation of women in Australia.

These two loudmouthed swindlers need to be gagged and deported before they distract and defraud any more honest opponents.

3.  Hoist myself up and dangle precariously from the flagpole at Parliament House, Canberra. (Late springtime activity only due weather constraints)

4. Streak at public events with protest message bootpolished on my backside. (summertime only)

Now according to Mrs GOF and the arresting Officers who apprehended me last week during my Stage Four protest sparked by the planned bulldozing of Cairns City Place, I am no longer in peak streaking condition.  I therefore need another failsafe option to deter these two screeching tennis prizemoney poachers from ever coming back to Australia again.

When I was six my Dad deterred me from engaging in all manner of aberrant behaviours by putting me over his knee, pulling my strides down, and flogging my bare arse black and blue with a wooden spoon.  It worked a treat. For more than half a century now I’ve been recalcitrance-free.

You will be delighted to know that I have just secured myself a job as a linesperson at Rod Laver Arena for this weeks Azarenka v Sharapova tennis match. I urge you not to miss it.

You will never again get the opportunity to witness this unique interaction between one linesman, two players, and one tennis racquet handle.

Inaugural Pain in the Arse Award

Give your eyeballs a break and let GOF  read it to you;

Thank you for attending the inaugural presentation of our Pain In The Arse Award.

We are gathered here tonight in the The Bucket’s magnificent new beach-themed auditorium which was constructed with the assistance of a ten million dollar higher-education grant from the Australian Government, as well as donations of $1000 from each of my blog subscribers who probably haven’t noticed it’s disappeared from their bank accounts yet.

A very special welcome to my American friends who are with us tonight. Thank you for traveling so far.  Although your first reaction to my mentioning the words ‘sport’ and ‘cricket’ might be to wander off for a slurp at the 24-hour bar in the foyer, I urge you to hang around to assist with the hurling of brickbats.
This time-honoured sport will begin shortly.
Besides, someone in Florida needs to share some responsibility for training today’s award winners.

Firstly let me take you back to a time before sportsmen and women were paid huge amounts of money just for playing games.

As young cricketers during the 1960’s there were two very important principles of sport (and life) which were drilled into us relentlessly by coaches and mentors.

1. “The game” is more important than your personal performance.

2. “Sportsmanship”, including respect for opposition players and umpires, was paramount.

Today I  lament the passing of “sportsmanship” in many sports, including my own beloved game of cricket.

Too often today, the degree of sportsmanship displayed on the field of play is inversely proportional to the amount of prizemoney on offer.

Let us now turn our attention to tennis. Never in it’s long history have players tarnished the image of the game so consistently and shown such poor sportsmanship as tonight’s award recipients.

These two spoilt little brats have the temerity to demand total silence from spectators yet proceed to launch themselves into spasms of screaming every time they hit the ball.

They claim that the habit has been a natural part of their game since childhood.  Pigs arse. Pull the other one. I had a daughter who once upon a time played tennis.  Had she started squarking at 100 decibels every time she hit the ball I would have firstly bashed her over the scone with the racquet before carting her off to have the disorder corrected by a psychiatrist.

Screaming is NOT a natural part of tennis you pampered little millionaire darlings. It is a contrivance.
It is YOUR deliberate tactic to distract opponents. Like it or lump it, what you are actually doing is CHEATING. You are defrauding your opponents, and defrauding the public of it’s right to enjoy watching your sport.
The practice should be outlawed immediately by the International Tennis Federation.

The Bucket has no pleasure at all in awarding the
Inaugural Pain in The Arse Award to the joint winners;

Tonight we truthfully recognise the contribution which these two players have made to women’s tennis, and acknowledge that both of them are dispensible millstones around the neck of good sportsmanship and decent behaviour;

Ladies and gentlemen, our award winners for 2012, 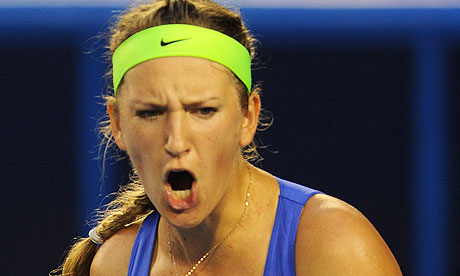 One short clip of an Australian crowd reacting appropriately to some of Sharapova’s absurd behaviour.

And finally, in response to a tweet just received from @eavesdropper532  “GOF do you think their childish ear-shattering on-court behaviour today will inevitably be carried forward into the ‘games rooms’ of their adult relationships tomorrow?”

You are a pervert eavesdropper532 ….A PERVERT! and NO I am not interested in paying $7000 for your covert audio recording of “Sharapova’s forty/love climax point in a marathon three-hour French Grand Slam.”
GO AWAY you horrible little man.

Welcome to the first-ever issue of The Bucket Sporting Supplement.

These  F U L L C O L O U R commemorative and collectable publications will document all of the world’s major sporting events as they unfold during 2011.

First on the calendar is the Australian Open Tennis Championships now under way in Melbourne.

Our Chief Sports Reporter and tennis tragic since 1948, Edward “Pommie” Grannit-Deuce, has been embedded courtside for the last twelve days filing hourly reports and photographs, interviewing players and spectators, and digging deep into his photographic memory to provide all the essential statistics as well as keeping us informed of any unfolding behind-the scenes drama in the locker-rooms.

My job as editor of The Bucket is one that I take very seriously, so
I have distilled this vast treasure trove of information into it’s essential elements and extirpated all of the following impurities;

1. All references to the obscene financial rewards handed out to these young people who are, after all, just playing a game.

2. The histrionics and abominable sportsmanship including racquet-hurling or axe-chopping and mouthed obscenities.

3. Blatant attention-seeking/opponent-distracting behaviour such as extravagant grunting, yelling, squeaking, screaming and howling before, during and after striking every ball.

4. Banal interviews. Tennis players and spectators are generally not renowned for being gifted orators or gushing fountains of wisdom.

My job is now done.

Please enjoy the following highlights package which includes every piece of action that was worth watching.
After that I will proudly announce the winners.

And the winners (ignore what Rupert Murdoch might tell you later this weekend) of the 2011 Australian Open Tennis Championship are;

Andrea Petkovic, the extremely personable, intelligent, multi-lingual, pistol-packing and dancing German athlete who breathed some much needed fresh air into this stuffy event.

Zoran Petkovic, Andrea’s Dad and coach, who co-starred from the sidelines with his daughter in a memorable and whimsical post-match interview.

The Bucket accordingly commends both of them for bringing back some of the “game” into professional tennis.

Intruder in the house

Daniela_hantuchova
Well goodness me Daniela……how did you ever find your way into The Bucket?

I think you can probably stay.  Broadly speaking you fall within my parameters of acceptable content.

We may have a small problem with my unreasonable daughter Globet who has unilaterally decreed that no woman younger than herself should share space with me.
You only fail that test by 10 months, so we'll just tell her that you are really 39 and all the exercise makes you look younger. No problem.

I have, for the past few weeks been in negotiation with the creator of The Bucket, concerning its future.
We reached the following conclusions;

1. He is a deeply troubled soul, with such an array of personality disorders that he probably should be committed forthwith to an Institution for the Terminally Bewildered.

2. The Israelis and Palestinians have been very naughty boys indeed during my absence, and failed to adopt my guaranteed peace initiative. (here)

3. All of my future literary contributions to The Bucket shall be limited to serious subject matter only, in deference to the troubled state of the world.
It is not an appropriate time for levity, trivia, or the inconsequential.

Whats with all the grunting, girls?

GOF has always enjoyed watching elite sportsmen and women on television.   The four Grand Slam tennis events of the world are on my viewing list.  Well they were.  I am now discouraged.  Poor GOF.
Womens tennis used to be a favorite of mine, partly because I enjoy watching beautiful women in short skirts (for which I may, in 2020, seek counselling), but mostly because they play extended rallies where they are able to exhibit a broader range of skills than the men who just blast off a series of aces at 200+ kilometres per hour.

So why has it become necessary in the last 10 years for some women players, especially from the ex Soviet bloc countries, to accompany every single stroke with ear shattering squeals, sneezes, grunts or facsimiles of orgasmic satisfaction?
Champions of eras past, Hingis, Graf, Navratilova, King, Court, and Goolagong conducted themselves with efficient and dignified silence.
Women golfers, soccer players, baseball and basketball players don't do it.  Why has it seemingly becoming a prerequisite for highly ranked female tennis players?

Any possibility it has something to do with bad sportsman(women)ship and distracting the opposing player?

No, of course not.  Silly me. There's probably a perfectly plausible sporting biometric explanation.   One which has no concern for the principle that to honorably play the game is more important than to dishonorably win it.

And thank you to whoever invented the television "mute" button.