Warning;  Contains one naughty word necessary to tell the story.
.
Mrs GOF’s father was caught between two worlds. Born in a remote village in New Guinea he was deprived of a formal education so he chose to relocate his young family by overland trek to Pindiu, a Government outpost where all his children could attend an English curriculum school.

He had extraordinary linguistic abilities. Speaking five languages fluently he also had a working knowledge of two more. After moving to Pindiu he started adding a few English words to his vocabulary. Most came from overhearing his kids chattering after school, or listening to the more colourful language being used by the Australian Patrol Officers for whom he worked as a labourer and translator.

He did not understand the dictionary meaning of these words and sometimes his pronunciation went awry. For example ‘idiot’ always came out as ‘enyot‘. I suspect the older siblings might have been complicit in ensuring the mispronunciations continued because they still tell funny stories about it today long after their dad has passed away.
“You enyots” was his reprimand for minor childhood transgressions, but more serious breaches elicited a bellowed “You fukkin enyots“. In his mind, these words meant simply “You naughty children”. 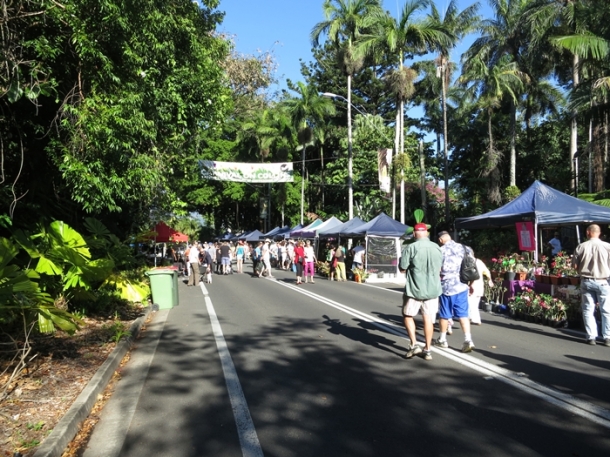 For nigh on twenty years Mrs GOF and I have had a market stall selling plants at the annual Father’s Day street carnival at the Cairns Botanic Gardens. For most of this time the smooth operation of the event was a credit to Betty, a matronly volunteer who toddled around with a clipboard, pen and a welcoming smile. Life was good back then.

A few years ago the Cairns City Council took over management of the event and replaced Betty with an assortment of overpaid tertiary-educated bureaucrats who abolished common sense and progressively turned administrative stupidity into an art form.

This year, applications and communications could only be made online.
We will not be allowed to participate unless we take an entire day off from our farm work and drive four hours to Cairns to participate in a mandatory induction course to learn about the workplace health and safety implications of setting up a market tent.

It’s being conducted this morning.  Goodness gracious me we’re going to miss out.
.
I refuse to enable any of these fukkin enyots to gain a foothold in my life.
.

Distinguished guests, ladies and gentlemen, boys and girls;
Welcome to the Universal WordPress Amphitheatre where it is my great displeasure tonight to announce the winner of The Bucket’s prestigious annual Pain In The Arse Award.

This year we are breaking new ground by giving recognition not just to a single exasperating plonker, but to an unknown number of parasitic paper-shuffling nincompoops who exhibited exceptional stupidity and ignorance, combined with a monumental lack of decency and common sense.

Millaa Millaa is a little town in my neighbourhood with a population of 250.  It’s the sort of town which immediately brings to mind the John Denver song lyric “I spent a week there one day.”

Millaa doesn’t have much going for it these days. It’s economic boom times are long gone. The timber industry and cheese factory are both just memories residing in the minds of old-timers, and the few remaining dairy farmers are now being financially emasculated by the absurd downward-pricing policies of Australia’s supermarket duopoly.

It is a picturesque town when the weather is fine, but often it is a bleak, windswept and rain-drenched place which most travelers are more than happy to bypass in order to find somewhere more climatically hospitable.

Last year, the good folk of Millaa Millaa approached their local Council asking for a toilet to be built at the cemetery.  All that rain tends to make some   revered community elders want to regularly dash off for a pee, even midway through funeral services, or during the interment of deceased friends.

The Council   architects estimated the cost of a toilet block to be $83,000 and accordingly advised that they couldn’t afford to spend that amount of money.
Undeterred, the resourceful members of the Millaa Millaa Chamber of Commerce immediately dug deep into their own pockets, as well as the sacred cemetery soil, and built their own custom designed toilet for the princely sum of just $1300.

The unique Millaa Millaa coffin-shaped toilet soon generated publicity and notoriety, and became a much-welcomed tourism drawcard for the town …….until large piles of bureaucratic and sanctimonious shit started hitting the fan of irreverent Aussie ingenuity.

In one of the most treacherous acts of administrative bastardry I have witnessed in my entire life, the Council ordered
“the immediate removal of this unauthorised structure.”

On January 25, 2013, the toilet was lifted onto the back of a truck and given a funeral service of its own through the centre of town.
Eulogies were delivered mourning the passing of common sense.

The faceless little dictators who made this decision richly deserve our 2013 Pain In The Arse Award in recognition of their managerial incompetence and the disrespectful and insensitive way that they treated the good people of Millaa Millaa, the very same people they are overpaid to serve.

To the stock pot of life add one measure of;

Recognised by the Guinness Book of Records as the world’s oldest university graduate.

At the age of 95 he enrolled again, this time to study complementary medicine.

His daughter Anne, age 70, is also engaged in her first course of university study.

Mr Stewart maintains strict regimes of physical exercise and diet, and when questioned about secrets to longevity he responded with;

“As long as you keep pedalling the bike, you will not fall off”.

Processed milk from the dairy farms in far North Queensland is transported half way across Australia by road to Southern Queensland.

Then, milk produced by farmers in Southern Queensland is trucked 2000 kilometres back up to supermarkets in North Queensland.

Presumably the truck drivers pass travelling in opposite directions somewhere around Marlboro, and wave to each other with smiling appreciation of this unbelievably dumb and irresponsible Corporate stupidity which keeps them employed.

Now, season to taste with a pinch of

There are times in a man’s life when he is entitled to bask in his own glory, and mindsurf the wave of pride which invariably accompanies the achievement of having contributed at a high level to the knowledge pool of mankind.

This is NOT one such occasion.
.

2.   The first visitor arrived via Google search 36 hours later.
(If GOM admits it was him then this result is rendered null and
void because he is “family” and that doesn’t count……it would be
a little like “insider trading”)

3.   The Bucket is presently Google’s Number One preferred educator
for those intellectuals wishing to study  “Dolly Parton bouncing tits.”

This month we have a dead heat.

1. Mr Jacob Zuma, traditional Zulu, polygamist, and President of
the Republic of South Africa who, at 67, has just fathered his
20th child.
This award is bestowed upon him, leader of a nation, for setting an
appallingly irresponsible example for his people, continent and the
world.

2. The International Media who did not have the courage to condemn
him for having spent his entire adult life recklessly contributing to
overpopulation.  Instead they chose to become obsessed with the
relatively trivial fact that the 20th child was born out of wedlock to a
woman 37 years his junior.

I am somewhat reluctant to recommend this Worldometers website
because the real-time statistics presented there will probably scare the pants off you.

And that's precisely the condition which got us into such a dire predicament in the first place.

Posted in Uncategorized and tagged population, stupidity. Bookmark the permalink.

Our little rock
There!  No deceptive title. I've said the two magic words seemingly most feared and avoided worldwide by politicians, theologians and business organisations.

There seems to be very little discussion of population control taking place in the public arena.  Even less in political campaigning, religious synodry, or economic analysis, for all these fields of human endeavour have a vested interest in an ever increasing human population.

No lesser person than Sir David Attenborough (a scholar of both the environment and human behaviour) has drawn our attention to the fact that NOW is the time to address the incapacity of the earth and our technology to produce food for a significantly larger population, whilst maintaining some semblance of natural environment.

Numerous conferences discuss global warming, pollution of environmental atmosphere, land and ocean, AIDS and other viral epidemics, poverty and starvation, desertification, and the diminishing supply of the worlds potable water supply.
Am I just totally dumb, or are not every single one of these issues directly attributable to, and symptoms of, overpopulation of the planet by humans?

Very occasionally an intelligent outcome is achieved from a talk fest. Such was the Kyoto Protocol which was subsequently ignored by the USA and Australia in order to perpetuate their economic growth at any cost.
Fortunately most participants agreed to a reduced cap of greenhouse gas emissions.

Now, why not address the base issue here, and agree to a population cap for every country on earth.
High birth rates in third world countries are resultant from inadequate education and a lack of access to health resources.  It is also a family defence mechanism against a high mortality rate.

In developed countries there is no longer any excusable or legitimate justification for producing large families.
Self glorification or a public demonstation of fecundity are no longer  acceptable grounds for procreation.  The Australian Governments $5000 reward scheme for baby production is an example of political expedience over logical thought and long term vision.

I rarely get angry about anything I cannot control. Human ignorance and stupidity is an exception, for, theoretically, it should mostly be avoidable.
We, all humans on this little rock in the universe, are tenants in common.  What happens on one side of the world affects the other.  We have one constantly recycling air and water supply and limited physical resource of land on which to live and produce food.

So where are the aspiring political and religious leaders willing to address the issue.  Of course there are none.  Instead we have the Pope, Sarah Palin wishing to take fertility control out of the hands of individual women, and $5000 baby bonuses.

I give up.  Sometimes I choose to blog about some really dumb stuff.

P.S.  World human population is predicted to increase by 1 BILLION in the next 12 years.