The greatest invention of the 20th century

Herewith please find another impeccably researched document of historical analysis with which to waste your time.

Inventions must necessarily be judged and rated in accordance with the circumstances of the recipient.

The Internet is of no possible use to a peasant farmer living in the high Andes.
Neither is a bicycle-powered water pump (yes, they do exist) likely to be Mrs GOF's favourite toy as she pedals away for 20 minutes waiting for me to complete a leisurely shower whilst merrily whistling The Mixtures 1970's  Pushbike Song.

So, after a couple of minutes deliberation I wish to declare my greatest invention of the 20th century to be; 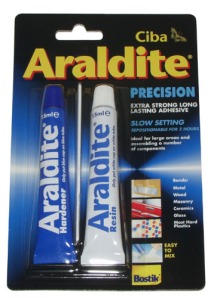 My first introduction to Araldite was in the wilds of the Sepik District in New Guinea, when I stumbled across a land surveyor camping in the jungle. His only companion was a Honda CT90 motor bike.

In a moment of intense nocturnal ardour beneath the soft glow of a Coleman lamp he had once apparently managed to overtighten the spark plug, creating a gaping hole in the engine head where once a neat metric thread existed.  He had, for 3 months, been happily motoring around with the spark plug securely Araldited back into the hole.

When I was 30 and a bit, I still possessed remnants of teenagehood when I knew everything there was to know in the world.  I convinced myself that I could build a house on the basis of the distant memory of once building a toy boat using balsa wood and icy-pole sticks.

Mrs GOF helped me build this fanciful dream project which now remains a monument (at least it has survived 2 direct hits from severe cyclones) to everything I thought I knew, but in fact did not. 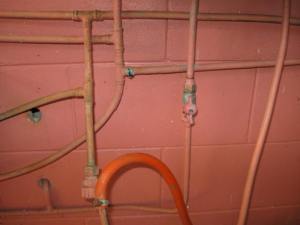 External copper water pipe is normally joined using pre-soldered "Yorkshire fittings".
GOF, of course, possessed legendary skills using a kerosene blowtorch and soldering iron.  What more did he need to know?
Well, in hindsight, perhaps knowing that these fittings required a special "flux" application before applying the heat would have avoided the spectacular, multi-sourced water fountain of Trevi proportions that spurted high into the sky after I turned on the supply tap.

We "temporarily" rejoined the pipes with Araldite in 1983, and  have had no trouble ever since.

Who needs quadraphonic sound, polyvinylchloride, ball point pens, jet travel, nuclear fission, Playboy magazine or Benny Hinn when you have the security twins of Araldite Tube A, and Araldite Tube B.

I’m all done with inventions

GOF is in a lot of trouble again.

One very nice Russian lady answered my request for pregnant test patients to come forward and help me to conduct a round of warmup trials on my modified centrifugal birthing machine. (here)

Petchonkina is a recent arrival in Australia, having been sponsored by her 3 brothers under the family immigration scheme.

The information that these 3 brothers were all lawyers specialising in Medical Negligence and Accident Compensation claims unfortunately was not in my possession at the time when I strapped her in, started it up, then became distracted while searching for some nurses to attend, and went away to the beach for a weekend of fishing.

The court case starts on September 2.

Would anyone like to volunteer as an evidential witness to support my plea of temporary insanity?

Mr Juan Gearloose from Sydney has sent me a letter requesting that I modernise the following failed invention
Patent # 6,681,419  which he found whilst apparently having nothing better to do on the internet.

You are a really stupid man, Mr Gearloose.
I don't care that you "find some delight at lingering in public urinals to savour the ambience and decor, and enjoy the simple bonhomie and repartee of likeminded patrons."

What do you expect me to do with this headrest?
Add an MP4 player?
Perhaps in the circumstances a Wii module might be more appropriate?
You need help Mr Gearloose.
Go away.
This is not the place to find it.

The Bucket has always been a civic minded Institution which has now chosen to divert all it's scientific resources to assist past inventors whose patented innovations failed by just a gnats gonad to catch on.

The full name of this patent is “APPARATUS FOR FACILITATING THE BIRTH OF A CHILD BY CENTRIFUGAL FORCE”.
“The present invention relates to [an] apparatus which utilizes centrifugal force to facilitate the birth of a child at less stress to the mother.  In the case of a woman who has a fully developed muscular system and has had ample physical exertion all through the pregnancy, as is common with all more primitive peoples, nature provides all the necessary equipment and power to have a normal and quick delivery. This is not the case, however, with more civilized women who often do not have the opportunity to develop the muscles needed in confinement.”

This is a truly worthy first recipient of Bucketary assistance, for its original failure was caused simply by failing to give adequate consideration to one basic biological fact.
Something which Julia Roberts almost accidentally stumbled upon  in "Pretty Woman".

i.e. Babies, at the time of parturition, are "slippery little suckers".

Test trials for this apparatus were carried out in a circular birthing suite with eight "catching nurses" stationed at the compass positions of North, NE, East etc around the room, as the birthing apparatus containing the mother-to- be rotated at increasing speed in a horizontal plane.

Minor casualties did however unfortunately occur when babies breached (sic) the cordon of nurses and slammed unimpeded into the padded perimeter walls.
Investigations at the time concluded that these regrettable incidents resulted from two things;

1. All women are not created equal when it comes to the g forces required to induce birth.  Excessive rotational speed combined with nurses standing too close in their catching positions caused most of the mishaps.

2. The failure of the nurses to understand that the trajectory of babies propelled from the moving platform was not linear.
They had, as baseball catchers, soccer goalkeepers, and cricket wicketkeepers will understand,  "failed to pick up the correct line" of the baby in flight.

The following proposals will improve efficiency, safety and social acceptability.
Firstly, two  birth mothers will be simultaneously harnessed into the apparatus.  This will engender "sisterhood through shared motherhood" unavailable with the original proposal of solitary confinement.
Secondly, the apparatus will be converted to have an elliptical track.  Only 4 catching nurses will then be required.
Two each at the peak-g-force North and South positions.
One primary catcher, with a secondary backup.
Between the two points, the ladies may simply lie back and enjoy the ride.
Less staff + happy mothers = win-win.

The modified apparatus will be ready for field testing at the end of 2009 and pregnant volunteers are urgently required to assist with this process.  ( email;  catchingpractice@gofsentertainment.org)
In recognition and appreciation of the level of trust I must now enjoy with all the women of the world, I will be generously donating my own time to operate the speed-controlling rheostat.

The Bucket does not seek universal acclaim for these little contributions it makes to society.
The knowledge that it has, in some small way, taken civilisation to another level of humanitarianism is adequate compensation.