Too old to dance? 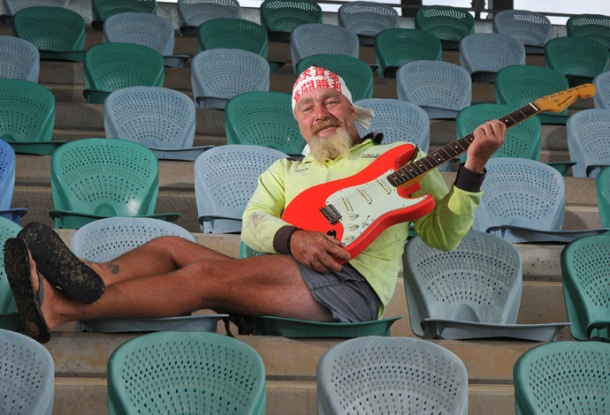 Last year 43 year-old Richard Fuller was forcibly removed from a Cold Chisel rock concert in Townsville after dancing in the aisles.
A magistrate subsequently fined him $450 (it seems young Richard might have overexuberantly resisted the security guards who were hauling him out of the venue) and then dismissed him from the court with “You are too old to dance, Mr Fuller.”

Well root my boots*.   I smell a conspiracy.

Older friends of The Bucket will remember that Richard is not the first ancient sacrificial dancing lamb.

Three years ago I also found myself in a spot of bother on my one-man dance extravaganza  “M. C. Screwdriver”  tour of retirement villages down the eastern coast of Australia.

It wasn’t my fault that a slight wardrobe malfunction at the Gosford Senior Ladies Lawn Bowls Club resulted in twenty matronly sheilas from the front rows running squealing and gesticulating out the nearest exit with their knickers in knots down to the local constabulary.

Well, last Saturday Richard made his comeback and he was accorded hero status at the inaugural Not Too Old To Dance Comeback Concert in Townsville.  (story and short clip here)
I wish Richard a long life full of happiness and dancing.

In fact, as my two years probation for lewd and lascivious behaviour has now expired, I might resume the nationwide dance tour from where it was so rudely interrupted if Richard would like to take over as headline act.  I am no longer quite as lithe and limber as I was in 2009 so I might just play a minor supporting role this time. Something involving audience participation perhaps.

What could possibly go wrong this time.

Posted in Uncategorized and tagged bs, dancing. Bookmark the permalink.

A certain wise and well loved Vox friend and elder statesman recently expressed some uncertainty regarding dancing protocol, etiquette and technique.
Maybe modesty and embarrassment prohibited him from directly seeking advice from the one great dancer in his neighbourhood.

I have not replied to all the laudatory private messages and emails pertaining to my recent nationwide tribute dance extravaganza .   It is my token attempt to imitate the arrogance of superstardom.

The tour unfortunately commenced on the wrong foot.
Backstage, following opening night at the Sydney Opera House, some smarmy representative of the United States Copyright Office hand delivered a document which forced me to rename the tour.

"M.C. Screwdriver unplugged" failed to attract much in the way of advance ticket sales.

Additionally a lot of my merchandise had to be forfeited to the bailiff, but fortunately the "Give it up for GOF" tee shirts sold well, encouraged much applause, and provided me with some quite unanticipated and pleasant fringe benefits.

At this point a couple of public apologies are required as a result of that Sydney performance, and I do so unreservedly.

1.  I apologise to all one hundred and forty six members of the
Gosford Senior Ladies Lawn Bowls Club, who were sitting in the
front rows, for my wardrobe malfunction.

2. I apologise to the entire Aboriginal population of Australia for
what I did with their ceremonial didgeridoo to that interjecting
octogenarian when I eventually invited him up on to the stage.

Now that all the fines have been paid I am free once again to share my dancing gift with Vox and the world.

Let us embark on a journey to discover neo-classical dance.
Unsure of the difference between a pirouette, fouette and arabesque?

Perhaps instead you would like to fine tune your foxtrot, paso-doble or bossa nova?

Let's get on with it.

My complete autographed interactive DVD set is available for purchase at just $199.95 from http://www.Gofsublimehoofing.com

Here is a little tantalising sample.

Yesterday I coincidentally wrote about leaving space within our selves to appreciate special things which come into our lives unexpectedly.

Last night on "So you think you can dance" Katie and Will danced a pas de deux.
My technical knowledge of dance is close to zero, but at least I now know what a pas de deux is.

Their exhibition of human movement was one of incomparable and exquisite beauty.  A display of such incredible artistry, talent, excellence and emotion, that it drew the judges to comment it was the finest they had ever seen.

And it also brought tears to the eyes of at least one normally cynical old man.