The numbers and predictions for severe tropical Cyclone Ita are quite frightening.

Predicted landfall 6 pm today local time near Cooktown, Far North Queensland, before being captured by an upper level trough directing it southwards to the Atherton Tablelands where it will arrive during early morning darkness tomorrow with embedded thunderstorms and tornadoes.
Bugger! Would someone like to send me some pestilence as well?

Rainfall predictions; Up to 12 inches of rain every 6 hours for the next 2 days.

There is still an element of uncertainty with this cyclone track.  An earlier-than-predicted capture by the trough will see it impact directly on Port Douglas, Cairns and those areas destroyed by Cyclone Yasi three years ago. Regardless of track variation this storm will leave a swathe of destruction hundreds of kilometres wide.

Special thoughts at the moment to Brad  who is directly in the line of fire. We hope he finds safe refuge.

I expect to lose my tenuous internet connection shortly. We will not be evacuating this time.  Inga will post updates on her blog (here) after the event has passed.  It may be a while before I am back here.

A choice of excuses…..

….for this blog having recently been in hibernation.
Please select whichever one takes your fancy.

Mr GOF, you are sitting before us today prior to being released after serving your four month custodial sentence for perjury.

You will recall that this situation was brought upon yourself during the damages trial instituted against a garment manufacturer by former Miss Australia and Miss Universe Jennifer Hawkins who had suffered an embarrassing wardrobe malfunction whilst wiggling her way down the catwalk.

Miss Hawkins had invited you to accompany her to this gala event in the dual capacities of Chief Bodyguard and Senior Backstage Lingerie Fitter.
As such, you were very close to the incident when it occurred.

Perhaps this photograph will jog your memory Mr GOF.

The presiding judge correctly refused to accept your testimony that
“I know nothing Your Honour.  As soon as it appeared to me that something was going awry I immediately averted my eyes and saw nothing.  You see I was raised as a Methodist Your Honour”  noting that it was the most blatant lie he had ever heard during his 40 year career.
“Let this sentence be a warning to other witnesses that perjury will not be tolerated in this court.”

You are also extremely fortunate that your sentence is not being increased today Mr GOF, considering the “Character Reference” that this Board received last week signed by no less than 29 members of an obscure group known as “Friends of The Bucket.”   All twenty nine signatures bear a remarkable resemblance to that of your own Mr GOF, and the Governor has since discovered a draft of the letter on the prison library computer.

We wish you well returning to a life of freedom Mr GOF and suggest that if ever in the future you happen to observe partially disrobed young women in public places you should immediately take cognizance of all the circumstances surrounding them just in case they might be required as evidence in a court of law.

I have painstakingly spent four months working my way from one end of the shade house to the other replacing flood damaged weedmat (and gravel eroded from beneath it)  as well as restoring each potted bromeliad to it’s pre-cyclone Yasi condition. 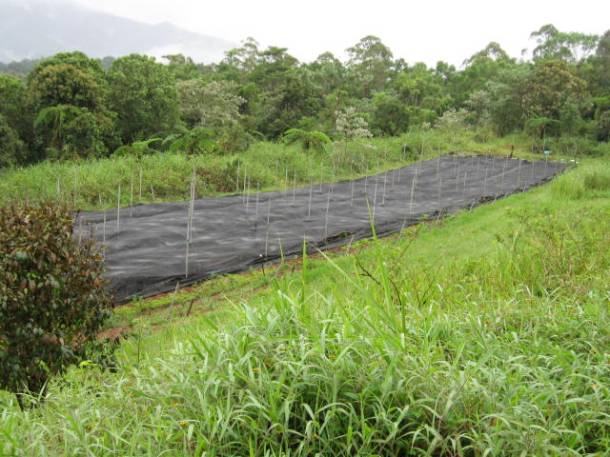 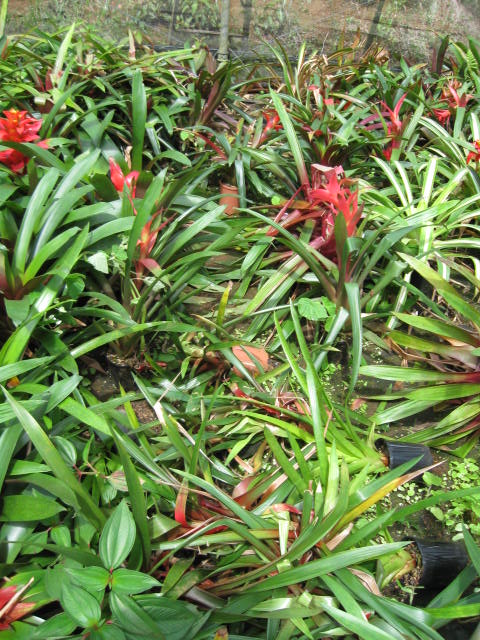 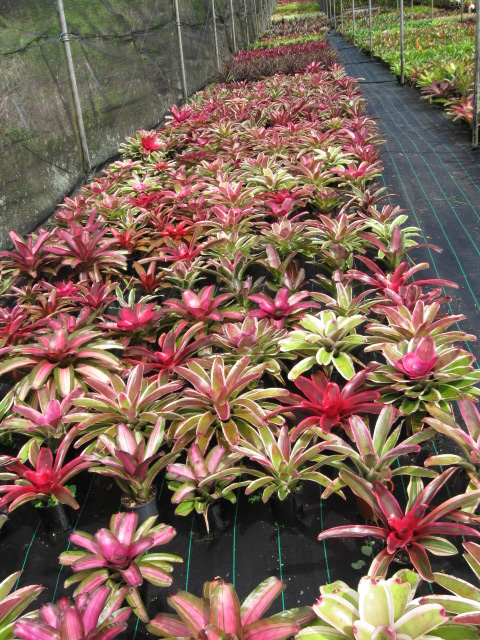 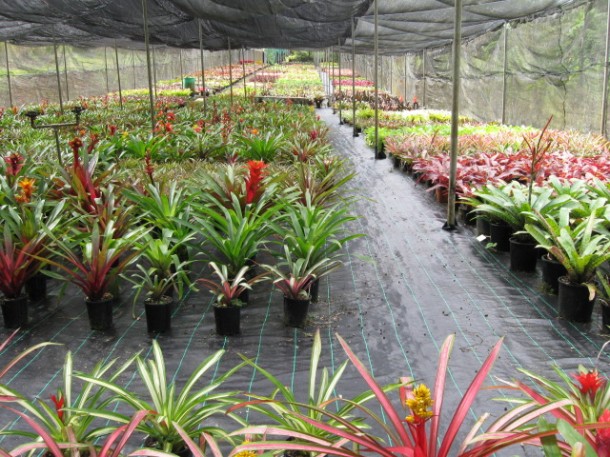 History according to GOF; Tutorial 103

China pioneered the process of manufacturing superior quality porcelainware from fine white clay mixed with silicates and fired in high-temperature kilns.
This technology remained solely in the hands of Chinese artisans until the eighteenth century AD.

A feature of this pottery was the intricate fine-lined artwork which often depicted scenes illustrating Chinese legends.

The blue and white Willow Pattern plates became popular in the West during the 19th and early 20th century, and original specimens have become highly prized and extremely valuable collectors items.

The following, however, is a plate mass-produced in China during the 1990’s followed by the modern day story of events which led to it’s design.

Hu Sung Dat was the Managing Director of Jonah (Asia) Pty. Ltd.,
a company based in Beijing that imported, then processed, raw
seafood from Japan before reselling it in cans bearing the
“Nippon Whalesong” logo.

Hu’s Headquarters were in an architecturally pleasing three-storey replica of an ancient Chinese pavilion located beside a landscaped garden dominated by an attractive water feature. Decorating the reception lounge in the office were some genuine artifacts dating back to the Ming Dynasty, including one purportedly owned by Emperor Yung Lo himself.

Hu’s daughter, Mee Sung Dat was a precocious nineteen year-old who had the unbridled hots for her Father’s secretary, the ruggedly handsome Mr Chang.

Mee Sung was bountifully endowed by Mother Nature with waist length silky black hair, an hourglass figure that according to those with intimate knowledge possessed significantly greater capacity on the top half than the bottom, and legs that went all the way up to where her femur was connected to her pelvic girdle bone.

It was these long and shapely legs that carried her today discretely up the thirty two steps in the fire-escape stairwell to the third storey office of Mr Chang, where she perched herself seductively on the corner of his desk, waiting expectantly for him to perform his daily thorough debriefing.

Chang diligently and dexterously devoted himself to this mutually rewarding ritual.
Mee Sung was the most beautiful girl in all of Beijing, but her normally radiant face today made Chang go all wobbly at the knees.
Just that very morning she’d had studs inserted in her eyelids, nostrils and lower lip and each puncture wound was still dripping tiny coagulating rivulets of blood.

Chang accordingly decided to start operations at the opposite end.
He slowly and sensually worked his way up from her nine slender toes (one had been accidentally amputated in a panda trapping mishap seven years previously) to her athletically smooth calves and thighs.

Quivering uncontrollably, his hands slowly loosened the belt of her faux-leather mini-skirt revealing to him for the very first time an exotic expanse of unexplored territory interrupted only by a single tattoo in the centre of her left buttock.
One five-letter word.
An indelible and permanent memento of Mee Sung’s teenage infatuation with pop singer Sting.

This was not immediately apparent to Chang because the Mandarin-speaking tattooist had misspelt the name by using a “K” as the final letter.

In this moment of temporary befuddlement Chang accidentally and unknowingly pushed the intercom button on the front of his desk which allowed Mr Hu to overhear the muffled duet of synchronous lust-fuelled heavy breathing and groaning coming from his secretary’s office.

The workers at Jonah (Asia) Pty. Ltd. had all signed an Employees Contract which detailed ten misdemeanors under the clause “Inappropriate Conduct”, each item of which constituted grounds for immediate termination. Misdemeanor Number 7 was;
“An employee shall NOT, during the course of his normal duty be discovered with both hands full of tits which belong to the boss’s daughter.”

Avoiding the large swinging sword in Mr Hu’s hand also constituted an immediate incentive for Chang to speedily leap out of the office window following Mee Sung onto the nearby limb of a weeping willow tree, before sliding down the trunk and running across the old arched bridge with Mr Hu in hot slashing pursuit.
.
.

Mr Wang was an 83 year-old bachelor who lived in an apartment across the road. He had recently bought a 35 optical-zoom camera specifically to spy on his 75 year-old spinster neighbour who was, according to Wang “still a pretty hot chick”.

Witnessing the confrontation unfolding across the road on the little bridge, he immediately took a photograph which became the inspiration for all modern Willow Pattern plates.

Lowlights;    Hit in the face by an irate tree that took offense at my chainsaw….relocated nose 3mm west, fingers skinned by another, then all 5 overstressed worn-out lower vertebrae fell out onto the ground while lifting shadecloth.
All replaced using fencing wire and Araldite.
Waiting for glue to set.

Conclusion;  If GOF was a horse he would be sent to the knackery.

This is going to take time folks.