Smile for the camera

Ow2
1.  It is hard to avoid noticing the huge steps forward that mankind has made in state-of-the-art teeth whitening.

A varied assortment of middle aged and beyond celebrities are sporting mouths full of almost luminescent fangs with such gleaming intensity that I need to adjust the contrast controls on my television.

I become distracted and entranced by the behaviour and the magnificence of the teeth, rather than paying attention to whatever important message is being imparted by the owner.

Am I the only one who finds a certain incongruity when such shininess and brand spanking newness appears on someone who is not only just over the brow of the hill, but has almost reached Life Everlasting Creek way down on the other side?

It is almost equivalent to having a grandiose and ostentatious stainless steel picket fence constructed out the front of a vacant allotment which has been seriously eroded by time and weather, and overgrown by gorse and weeds.

I have an almost insatiable urge to grab hold of some miniature spray paint cans, get into my television, and do some serious tagging.

Posted in Uncategorized and tagged celebrities, television. Bookmark the permalink.

This one’s for you Kermit 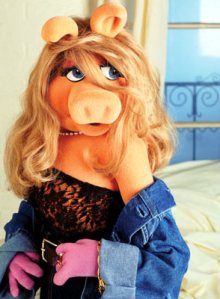 Uncooked celebrity ham
Books are something special.  They smell nice.
They also have recorded the history of mankind, and the research findings and philosophies of our greatest minds.  They intrigue children and inspire their imaginations.  They entertain us.
Books cover thousands of topics, and fortunately for us Mr Melvil Dewey in 1876 formulated a logical decimal system for categorising them in public libraries.

His original system has been improved and changed several times during the past century, and, in the light of recent publications,  I would humbly like to suggest that an additional category is required.

The works of many celebrity authors would then be given a more appropriate place of residence.
Including Miss Piggy.
Her latest offering of verbiage is The Diva Code, which contains miscellaneous gruntings about fashion and career.
She has previously published some male-hating swill, and espoused all women of the world to immediately become "more selfish, self-indulgent and self-obsessed".

How many trees were cut down to enable publication of all Miss Piggy's porcine puke?
What sort of credibility does the porker in the pink dress have anyway?
Zero.
She is terminally and permanently psychologically scarred from the humiliation of having had a human hand shoved up her backside for most of her public life.

She wants revenge.  Hence this compilation of crassitude.

I suggest she should write about subjects within her purview.

It could be filed alongside Paris Hiltons Guide to Modesty and Chastity in the Twenty First Century.   1001.502  Shite

And, the soon to be published;
Full Bucket  …..  The complete life story, philosophy and greatest literary works of GOF.
An illustrated pamphlet, to be found at;   1001.503  Shite

And Miss Piggy, please stop molesting my little friend Kermit.  (unless he really enjoys it.)