Today just sorta snuck up on me disguised as one of the previous 23,375 days.

No doubt a couple of the usual suspects will fail to respect the dignity of the occasion and take the opportunity to poke fun at my senescence. The majority will however, in the spirit of generous charitable bloggery, send to me a gift from the following list to ease my misery, distress and utter despair.

Please send to GOF, c/- Church of the Ancient
and Bewildered, Queensland, Australia.

And the following is my gift to you in return;
The Sydney Opera House Ship Song Project featuring some of Australia’s finest popular singing and dancing talent.

P.S.  A daughter’s view of GOF’s birthday achievement may be found  HERE .

And is it any wonder when I have a daughter who does things like this to me?

The things up with which I have to put.  Sheesh.

Posted in Uncategorized and tagged birthday, globet. Bookmark the permalink.

Anyone who has followed my bloggery for a while will know that I have a pretty special relationship with Glob.  One that will survive, even after I have chosen to publish the picture of a pile of cassowary shit in honour of her birthday.

Please let me explain why it is so.

Globet was 9 months old when we moved to GOF's Paradise, an isolated, undeveloped 46 acre patch in the middle of the rainforest.  Along with Mrs GOF we had one old ten foot long caravan to live in during that wet season of 1983 until we built a little house.
Access to civilisation involved travel along 7km of deeply rutted, rain sodden logging track meandering through the jungle.  No other vehicles regularly travelled along this track, for frequently it was impassable even to four wheel drives.  In the early years we had a Ferguson tractor located at the top of the 7km….we parked the car there and commuted to G.P. by tractor.

The road had only marginally improved by the time Globet started school.  For the purpose of getting to the school bus stop she pillion-passengered with me on a little Honda CT110 "postie bike" until, after grade 7 with her long legs dragging on the ground we upgraded to a taller CT 200.

It often took more than 20 minutes to travel these 7 kilometres, and, when the road surface was too slippery or boggy, or frequently when trees had fallen across the road, we would have to make our own detour through the forest.

In her 11 years of primary/secondary school education the Glob/Gof motorcycling unit clocked up 30,000 km of slipping and sliding, and at least 495 hours of unique commuting time.
We got very wet and we often got cold, but we had some fun along the way.  We shared stories and experiences and we bonded.
And not once did we ever fall off.
Those who ride motor bikes will know that successful pillion passengers must have both a sense of balance, and faith in the drivers ability.  Globet had both.

I commenced this piece with a paternalistic reference to my "little girl".
She is no longer my little girl, but in every conceivable way my equal as an adult.  An adult possessing far more knowledge, poise, wisdom, maturity and sensibility than I had at her age.

Just as she trusted me all those years ago, so it is that I will happily hand over to her, and all the other equally caring and concerned members of her generation, the reins of stewardship of this world.  This planet, which my own generation has so deplorably pillaged for profit, overpopulated, polluted, misused, and filled with inequality, hatred and warfare.

So today, my dear Globet, is your special day.

And mine, to remember it all.

And why the cassowary shit?
It is part of her unique life experience, understanding that by dipping your big toe into a pile of cassowary poo and estimating its core temperature a useful determination can be made of just how long ago the bird passed by.

Posted in Uncategorized and tagged birthday, globet. Bookmark the permalink.

A party of four

The bucket grudgingly acknowledges that its creator GOF has completed 6 decades of existence on the planet, but would like to remind him, that for many of his acquaintances it has seemed an awful lot longer.

Birthday celebrations in my life have been few and far between.
Deliberately.
I dislike with some considerable intensity social chit-chat and feigned friendship.
I had a tenth birthday party and recall having enjoyed the experience of achieving double figures, and the specially organised yabby (small crayfish) catching competition for all of little gofs fiends [sic] at the farm dam.

Apparently shortly after that I became a social recluse and established the GOF Rules of Engagement for social gatherings.

The rule was tested briefly in 1969 when a group (exceeding 6) of my compatriots in remote Papua New Guinea attempted to arrange a surprise 21st birthday party.  I smelled the rat in advance, grabbed my fishing rod and rucksack and trecked solo for 6 hours down the even more remote Gwenif River, and enjoyed a couple of days of barbecued fish, tranquillity, and hot Barossa Pearl. (sparkling white wine).
I have rarely been troubled by party planners since.

Mrs GOF was appalled when, by judicious use of some slightly ambiguous language I was able to weazel my way out of 50th birthday celebrations.  Through guilt at that time, I subsequently agreed to having some formal recognition of my 60th birthday……what the hell…..it seemed a long way off at the time, and I might run out of road before the distance was travelled anyway.  I did, however, reserve the inalienable right to choose the venue.

Now, Australia is not a continent of high mountains. No Rockies, Andes or Alps here.
Nevertheless we do have Mt Bartle Frere.  It is the highest mountain in my home state of Queensland at 5297 ft, and it is at the centre of the Wooroonooran tropical rainforest National Park.  It is an utterly beautiful and pristine part of our country. Possibly fewer than 1000 humans would trek to the summit each year, as the journey involves 10 hours of serious climbing and scrambling over tree roots and rock faces, whilst avoiding 200 inches of rain and thirsty leeches.

The summit seemed to me like the perfect place to have a memorable birthday celebration, whilst ensuring that socially, the whole project would fall within my Rules of Engagement.

Herewith is my small tribute to those who attended.

1. Gordon and I are both relics of another era.  Externally, I appear more "relic" than he, but the truth needs to be told.  He is the only remaining connection I have with my school days, and an optimistic, inspiring, philosophical and thoroughly entertaining friend.  He chose to celebrate his recent 60th by going skydiving.  I feel suitably humbled in the field of adventurism.
2. Globet is very much her Fathers Daughter.
A huge joy in my life, who carries with great dignity all the genetic imperfections which I passed on to her.  We are often able to communicate simply through the exchange of glances, for we each know what the other is thinking. Thats nice. For me anyway.
3. Mrs GOF has, for reasons known only to herself spent 30 years putting up with me.  Some achievements of human endeavour are inexplicable.  This planet has never seen a more gentle, kind, happy or talkative human being. (why do I suspect mentioning 1 of those 4 may result in some temporary grief for me) We are perhaps perfectly matched opposites.

For me, celebrating 60 involved some physical challenge, the pursuit of a little dream, a thankfulness for physical health, an admiration of environmental beauty, and the company of some really special people.  And less than six.
I like my life.

Posted in Uncategorized and tagged birthday. Bookmark the permalink. 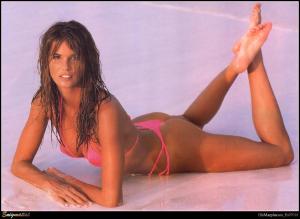 This story requires a little background information and a somewhat circuitous explanation.
It will come as no surprise to readers of my bloggery that I have had a certain academic interest in the career of one Ms Elle MacPherson.

It all began 25 years ago, when (regurgitating an extract from my blogging discussion of another topic);

" And if I dig really really deeply into my television watching memory bank I can recall a 19 year old Elle Macpherson strutting her thinly veiled magnificence along the beach.  It was a performance destined to take her to supermodeldom, and cause old men, young men and some very naughty boys to dream of things that had nothing to do with the product she was advertising."

I have discovered the reason for my puerile behaviour.
It was all Mrs GOF's fault.
I was too obsessed with work matters at one time, and in my pre-midlife she suggested I needed a hobby.  It was difficult to generate enthusiasm for collecting stamps, matchboxes or souvenir teaspoons.  Thus began the collection of Elle MacPherson pictures, calendars and memorabilia, acquired with such zeal and enthusiasm, that, had I shown an equivalent amount of devotion towards my business interests, I would probably now be a very rich man.

And so it came to pass that I should receive the ultimate birthday gift last week.  Daughter Globet strode across the arrivals lobby at Cairns airport and presented me a glossy document with a picture of a beautiful 44 year old Elle MacPherson on it, and emblazoned to one side were the words;

WOOHOO!!!! after waiting 25 years for Elle to visit me, or at least telephone me in acknowledgement of my long term devotion to her, I was finally in receipt of her ultimate instruction.

I was not immediately certain how the transaction was to be completed……whether this was a voucher to be redeemed upon presentation, or more a "lay-by" arrangement for a future date.
Nevertheless GOF's happiness at that moment knew no bounds.

Extreme happiness is inevitably a relatively short term condition.  Some episodes shorter than others.  Preceding my instructions for eternal bliss was also some fairly compelling written evidence that the document in my hand was the VirginBlue Inflight Magazine.

A couple of confessions.  Firstly, over the years, I have delighted in exaggerating the extent of my Elle collection to deliberately fuel the fires-of-scorn heaped upon me from female friends who were convinced my deviate behaviour would lead my marriage into ruin. Thank you to Mrs GOF for being complicit in these winding-up-people operations.  And no, for those who have enquired, I sadly do not have 2736 Elle pictures.

Confession number 2;
The real reason for my airport happiness,( and this whole smokescreen of storytelling), was that Globet had chosen, (in deliberate contravention of my specific instructions and Fatherly logical advice) to travel all the way across this great land to be with me for my birthday.

Some offspring earn a level of parental love, affection and respect far beyond their genetic entitlements, simply through the honorable way in which they conduct their lives, and treat other humans.

Thank you, my dear Globet for caring.