Growing up with Napoleon

As we navigate the ocean of life through a flotilla of fanatics, it appears to me that there are only two people remaining in the world with a grip on truth and reality.  You and me.

Accordingly I would like to donate the following grain of historical sand to add to your expansive beach of general knowledge.

I was born at Ajaccio on the island of Corsica. My childhood friend, Napoleon, was a painfully shy and introverted boy who rarely ventured outside the family home.
When we were both eleven years of age our families moved to Brienne-le-Chateau in France, and by sheer coincidence lived on the same street. The Gof’s at No.17 and the Buonaparte’s in No.26.  The year was 1778.

Unlike me, Napoleon had grown into a rather saturnine and bedraggled looking lad with a ruddy complexion. Truth be told, he was still very much a ‘Mummy’s boy’ with no sense of adventure at all.

Eventually I tempted him to come and play in one of the sand piles on a nearby vacant allotment. It had once been the site of a glass factory which produced Waldglas utilitarian products until Great Britain started to dominate the world table-glass market in the 1750’s at which time our little factory had been abandoned and demolished.

When Napoleon first saw the forts and battlements which I’d constructed in the sand pile he was very upset because he was such a peace-loving person. We decided instead to build cathedrals in both Gothic and Romanesque styles, complete with classical motifs. Then we carved figurines and sacred objects from leftover lumps of clinker and furnace slag, and we had great fun moving our bishops, cardinals and parishioners around the cloisters and ambulatories of our many churches.

Occasionally Nap’s eyes would glaze over and he would utter really weird things like “Religion is excellent stuff for keeping the common people quiet” and “A constitution should be short but obscure”.  Funny boy. I think he might have been an escargot or two short of a full banquet.

Eventually we ran out of sand in our pile, so one dark night I dragged Napoleon along to help me steal some more from the piles which all the other kids were using.  When we’d doubled the size of our sandpit Nap said to me “ Shit GOF, that was a lot of fun. I’ve really got the taste for expansionism now. What else can we do now?”.

At that point I knew I could trust Napoleon so I shared with him my ultimate dream.

“You know Nap, when I grow up I’d like to go to military school then unleash an unprecedented wave of invasion and carnage on the world. I’d just love to go and belt the crap out of some Austrians, Russians, Germans, Prussians, Sardinians, Syrians, Egyptians, Swiss, Ottomans, Portugese and Poles.”

Sadly I was never able to realise my dream because of what happened in 1785.

My father relocated our family to La Rochelle near the Bay of Biscay and one weekend Dad and I went fishing in a crude little sailboat.  A tremendous storm blew us out into the Atlantic Ocean then southwards into the Roaring Forties until we eventually made landfall on Terra Australis driven by the South-East tradewinds.

Even today I find it difficult to believe that we had actually survived for two years adrift on the high seas.

We were the first Europeans to discover the continent of Australia.
The year was 1787.  Much of the gloss of our epic achievement was removed twelve months later by some overdressed pompous Pommie bastard who sailed into our little settlement of Goftown and renamed it Cooktown.

Despite my fame and advanced years (243) I still sometimes wonder whatever became of that unobtrusive and bashful little friend who I left behind in France all those years ago. 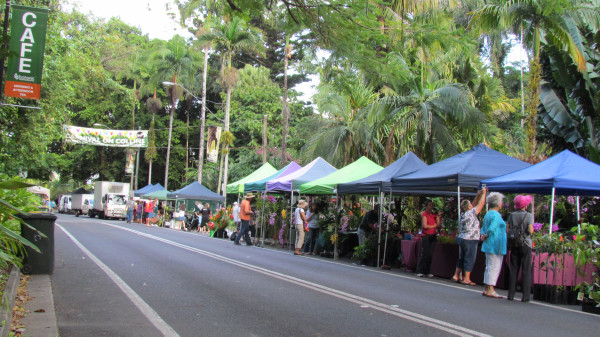 ‘Tis time for another offering in my series on thankfulness.

As I canter (and occasionally limp and hobble) down this final straight of the Three Score Years and Ten Stakes, I carry in my saddlebag a full measure of thankfulness for my good health, the contentment that I feel with my place in the universe, and also for the privilege and gift of life itself.

Every day is precious, but if I had to choose one extra special day from the year it would be Fathers Day, the first Sunday in September.

At 3 am I drive down the mountain to civilisation with Mrs GOF asleep in the passenger’s seat, and then we set up our little ‘one carpark’ sized market stall on Collins Avenue, a location which must surely have one of the most beautiful backdrops in the world. (photo above by Mrs GOF)

My enjoyment and appreciation of Father’s Day is multi-faceted.

Firstly it ceremonially marks the beginning of Spring, my favourite season which recharges me with all the energy lost trudging around in the driving rain and cold ankle-deep mud of Winter.

We really do derive great satisfaction from growing potted plants in partnership with Mother Nature, despite the bad words I said and wrote about her after recent cyclones Larry and Yasi.

Icing is added to our little cake of productivity by being able to sell our products directly to the end users at local community markets like this one. There are rewards for both parties in this time-honoured trading relationship that transcend the simple commercial transaction which takes place, and many of our customers have, over the years, also become friends.

Fifteen thousand people flock to the carnival every year, including dads enjoying precious time with their children and families.
Musicians perform throughout the day in the street, restaurant and the garden’s natural amphitheatre. This is the one day of the year when I actually tolerate and dare I say it, enjoy, being part of a large crowd of human beings.

Finally, my own kids, chips now dispersed far from the old block, still choose to stay in touch with me regardless of all the parenting experimentation I carried out on them…………all in all it’s enough to blow the cork right out of my bottle of Chateau GOF Life Satisfaction Vintage 2012. 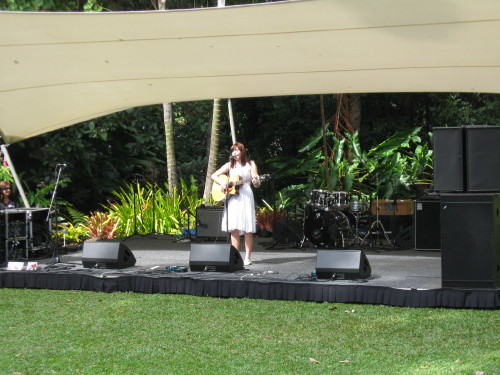 Louarde Thomas is a local singer/songwriter who possesses a unique musical gift.  Here is her song Superman’s Lullaby. 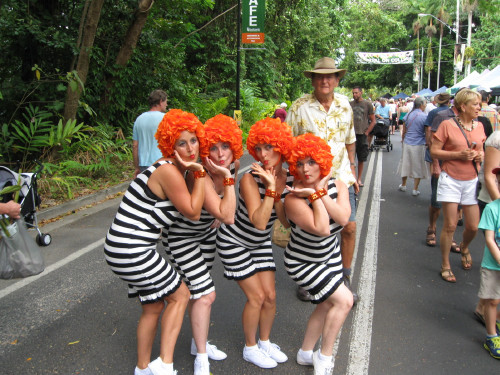 One of several orchid stalls 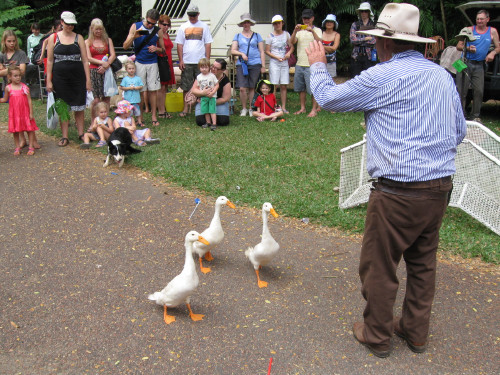 Sheep, mortified, being shorn with a less than perfect view of the world.

Pigs stole a 30kg bunch of bananas which I had stored ‘out of reach’ on top of a hay bale in the garden shed. 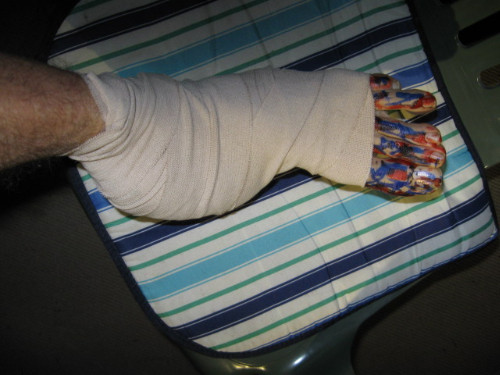 Any comment or ‘like’ deemed by management of The Bucket to be pig propaganda or otherwise rooting for the porcine insurgents will receive a pingback into your computer which will include an exploding packet of pigshit.  This is very serious warfare.

Footnote;     No GOFs were hurt during the production of this story. 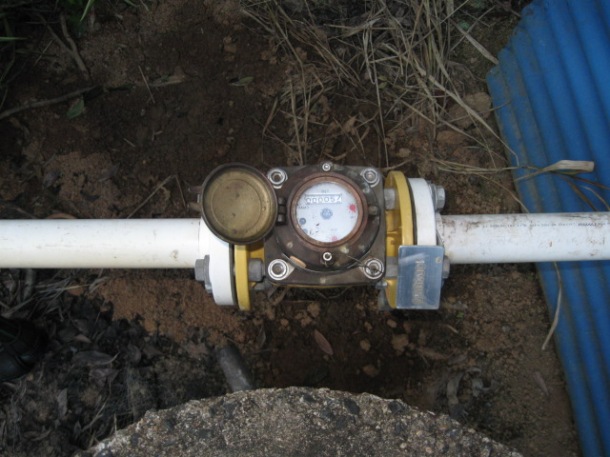 When the Government hacked a great big chunk out of my water-delivery pipe on my pump which I installed on my farm dam which I built, then filled the gap with a water meter so it could effectively charge me the same rate per-litre as people in town who are connected to the municipal reticulated water supply I said to myself;
“GOF, something stinks in Paradise.”
(Paraphrased in the interests of blogging decorum)

After several weeks of crusading and making a public nuisance of myself to draw attention to what I viewed as gross inequity, two bureaucrats suddenly showed up on my doorstep last week to find out what the curmudgeonly old thorn-in-the-Departmental-side bastard from the bush was carrying on about.

One gentleman was not in good enough physical condition to walk all the way down the 500 metres of track (200 vertical feet) to the pump site, but after the other one had huffed and puffed his way back up the hill they concluded that a meter was not justified, but that the legislation provided very few avenues for exemption. They drove off into the sunset to consider what options might be available.

Yesterday I was given permission to remove the meter.

Thank you to my local friends Mike and Roz who, during their last visit, rekindled my sense of outrage after I had accepted the meter as a fait accompli.

Thanks always to Inga for being a comforting source of wisdom beyond her years.

Thank you to all my blog friends who cared enough to take time out to give me moral support to take on The Establishment.

It is also appropriate and proper that I give due credit to those two decent public servants who acknowledged the injustice and found a legislative loophole through which I could squeeze myself and my rustic water supply system.

PS     I will also be returning this beautiful marker post which mysteriously disappeared from my front gate just minutes after it was installed to provide navigational guidance for meter readers.
I located it deep inside the adjacent National Park jungle.

Being blue, I’m blaming it’s disappearance on a Bower Bird who must have seen it as the ultimate decorative accessory for it’s bower.

You just can’t trust some animals round these parts.

We thank you for contracting our company to provide a solution to the escalating rate of gun-related deaths in Colombia and the resultant unacceptable lead contamination levels found in drinking water supplies downstream from Bogota’s cemetaries.

As you are aware, this brief was placed in the competent hands of our senior partner Mr GOF, an experienced munitions and environment expert, and accomplished drinker for more than six decades.

Mr GOF very much appreciated the hospitality which you lavishly bestowed upon him in Bogota at the ceremonial banquet held in his honour.
He says he will never forget the dessert upon which you liberally sprinkled all that icing sugar before asking him to sniff it repeatedly and deeply to comply with customary ritual, and wonders if your chef would be kind enough to send him the recipe and a kilogram or two of ingredients.

We have great pleasure in attaching herewith Mr GOF’s final recommendations for reducing your gun-related deaths from the current annual rate of 50 per 100,000 population to the USA level of 10, then eventually to that of Australia which sits at 3.

It should however be pointed out that if the recommendations are implemented, deaths will spike during the first 12 months to around 10,000 per 100,000 before settling back to 10 in the following year.

This patented electronic sensor instantly combines and evaluates visual and GPS data before operating the projectile deflector at the moment the gun trigger is pulled.
The JESUS Conversion Kit (sensor box and 180 degree barrel) comes in various sizes to suit any sort of firearm or military armament.

We recommend the immediate mandatory fitting of JESUS Kits on all new firearms and retro-fitting to existing guns.

Any reticence on the part of current gun owners (including members of the Gun Proliferation for Personal Safety Lobby, that pre-eminent collective of compassionate, intelligent, clear-thinking logicians) can be overcome by offering them incentives such as the following;

Justification Parameters programmed into the JESUS Sensor which enable normal “straight ahead” shooting.

1. Intruders entering the owner’s home or business with malicious intent.

2. Defence Force personnel repelling a hostile foreign threat, but only whilst remaining WITHIN their own lawful land borders or territorial waters. Imaginary threats do not count.

3.  The provision of meat for human consumption, and landowners protecting property from feral animal damage.

5.  Sporting shooters who derive a sense of achievement and/or superiority from making expensive little holes in paper targets or blasting the shit out of catapulted airborne lumps of clay.

ALL OTHER USES WILL RESULT IN PROJECTILES BEING DEFLECTED INTO THE 180 BARREL!

The Nobel Peace Prize is looking good for GOF this year.