Puberty is a confusing time of life which I’d  prefer to forget.
It was a total waste of ten good years.

Adolescent boys growing up in the Victorian goldmining town of Bendigo fifty years ago were blessed with the empowering gift of freedom to explore the countryside around them, but compared to the youth of today many of us were mere babes in the woods when it came to understanding more worldly matters.

Every weekday I pedaled five miles to the brand new White Hills Technical School on the outskirts of town.  At lunch time we were allowed to swarm unsupervised across the Midland Highway to the one hundred acres of abandoned gold diggings where we would climb mullock (tailings) heaps and explore underground tunnels and shafts which had remained unused for half a century or more.

No kids died, or disappeared, or required medical repair.
To the best of my knowledge.

At thirteen I was also impressed by one of my classmates who, when we went into the central part of town, exhibited some special talents, including the ability to identify women in the crowd who were in either the second and third trimester of pregnancy.
The very first time he pointed some of them out to me I wondered what awful thing might have caused these poor women to swell up like that.

“Well I think it happens like this”  commenced Bodgie Carmichael, Form 2A’s fourteen year-old fount of grown-up knowledge, before giving me the dubious benefit of his vast inexperience whilst tamping down his brilliantined Elvis hair and admiring his own reflection in a plate-glass window.
“Wayne, my big brother, said he almost did it once, so maybe we should ask him. There is a difference too between fat and pregnant y’know Goffy and sometimes even I can’t  tell which is which”.

Presiding over all this childhood naivety was Foo the King of Graffiti.  He was everywhere.

He peered over fences or looked up at me from footpaths and roadways and gawked at me from the walls of factories and even the hospital perimeter wall.  He rattled past me trying to disguise himself amongst advertising placards on trams, and he even sped past me one day as a barely distinguishable blur on the side of a red wooden carriage of the Melbourne to Bendigo express train.

Whatever happened to Foo?  I never see him any more.

Even Mr Google doesn’t know what happened to Foo.

It seems that Mr Foo was probably born shortly before or during World War II, but his parentage remains uncertain.
Perhaps his name derived from the British and Australian military acronyms for Forward Observation Officer, or FUBAR
(F***** Up Beyond All Repair).

American cartoonist Bill Holman also discovered ‘Foo’ inscribed on the base of a Chinese figurine and then used the word in his pre-war cartoons. The United States however widely adopted the name ‘Kilroy’ for it’s very own little bald-headed graffiti man. (Possibly named after a Massachusetts Shipyard Inspector J.J. Kilroy)

The original Foo graphic is thought to have been inspired by the following electrical circuitry diagram.

A British naval magazine in 1946 noted that  “Mr Foo is a mysterious second world war product gifted with bitter omniscience and sarcasm.”

I remember him more fondly as the only other witness on a Bendigo tram in 1962 who saw three schoolboys discover a packet of condoms hidden underneath the slatted wooden seat.  The boys proceeded to inflate them one by one to maximum lung pressure before setting them loose out the window onto View Street where they erratically jetted, flubbered and kerfoofed amongst cars and bicycles just like single-minded little spermatazoons in search of the perfect egg.

Mr Foo and I were both appalled at the juvenile delinquency which we had just witnessed.

Has anyone seen Mr Foo or Mr Kilroy recently? 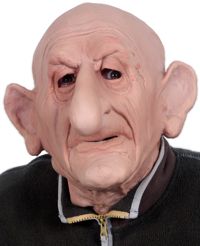 "Life is like a sewer. What you get out of it, depends upon what you put into it." (Tom Lehrer)
View all posts by GOF »
← Inaugural Pain in the Arse Award
A change of heart →