Evidence that I actually went somewhere

Little gof’s house
In the early 1950's my parents bought 240 acres of almost soil-less quartz and clay at Castlemaine, Victoria, in a 20" p.a. rainfall zone and attempted to make their living from dairying.
It had previously been used as a prison farm to keep inmates usefully occupied.
Mum and Dad, with assistance from extended family built this house in 1953, and it has recently been modernised and renovated by the present owners.
These days it also has electricity connected.

The prison gatekeeper was responsible for screening visitors to the farm.  The building was used by little gof as the worlds most fantastic cubby house equipped with stove and fireplace. 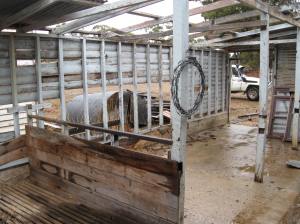 Confronting this building after almost 50 years was an emotional experience for me.  With my Dad often in hospital, Mum and I would hand milk 20 cows before and after school.  My school was 3 miles away, although often a much longer distance with my bicycle detours exploring bush tracks.
Milking machines were installed in 1956. 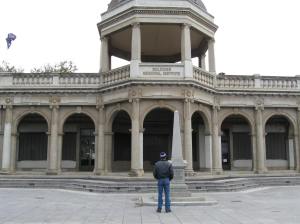 This monument is an indication of the regard that people in many country towns have for those who fought for the freedoms we now have.
We coincidentally visited here on the Anzac remembrance day weekend.

For the ultra modern gentlemen of the world who would like to emulate GOF's chic ensemble, he is wearing a pleasing denim and wool combo, with vinyl jacket, and crowned by a unique and stylish item of oriental knitwear, hastily obtained from a secondhand shop for $2, to stop his ears from freezing off. 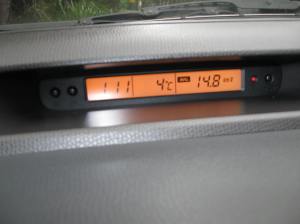 4 degrees Celsius.  What more needs to be said!

Victoria is unsuitable for human habitation.

For at least one human anyway.

Posted in Uncategorized and tagged childhood, victoria. Bookmark the permalink.

"Life is like a sewer. What you get out of it, depends upon what you put into it." (Tom Lehrer)
View all posts by GOF »
← Third time lucky?
GOF and Globets Magical History Tour →